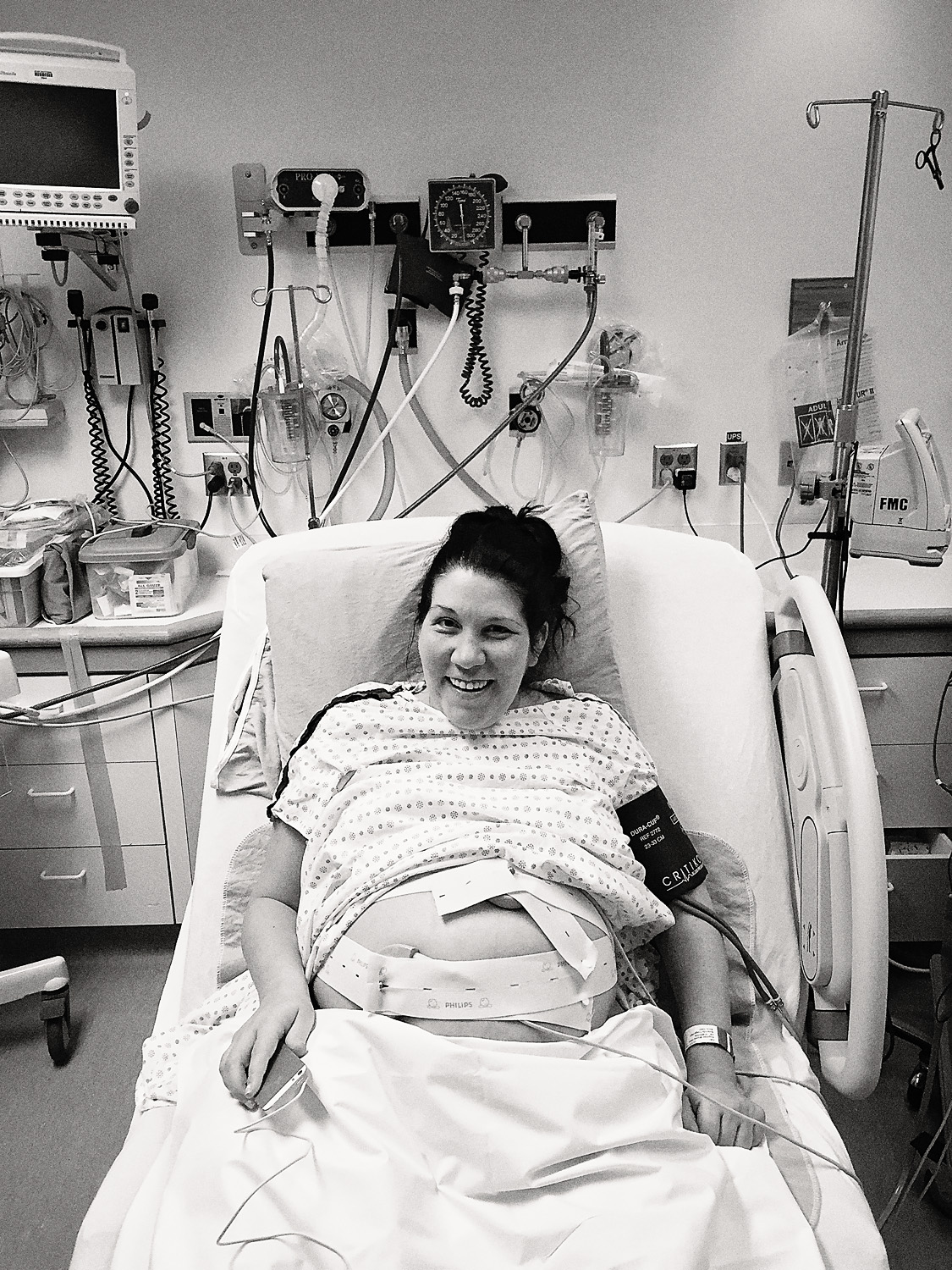 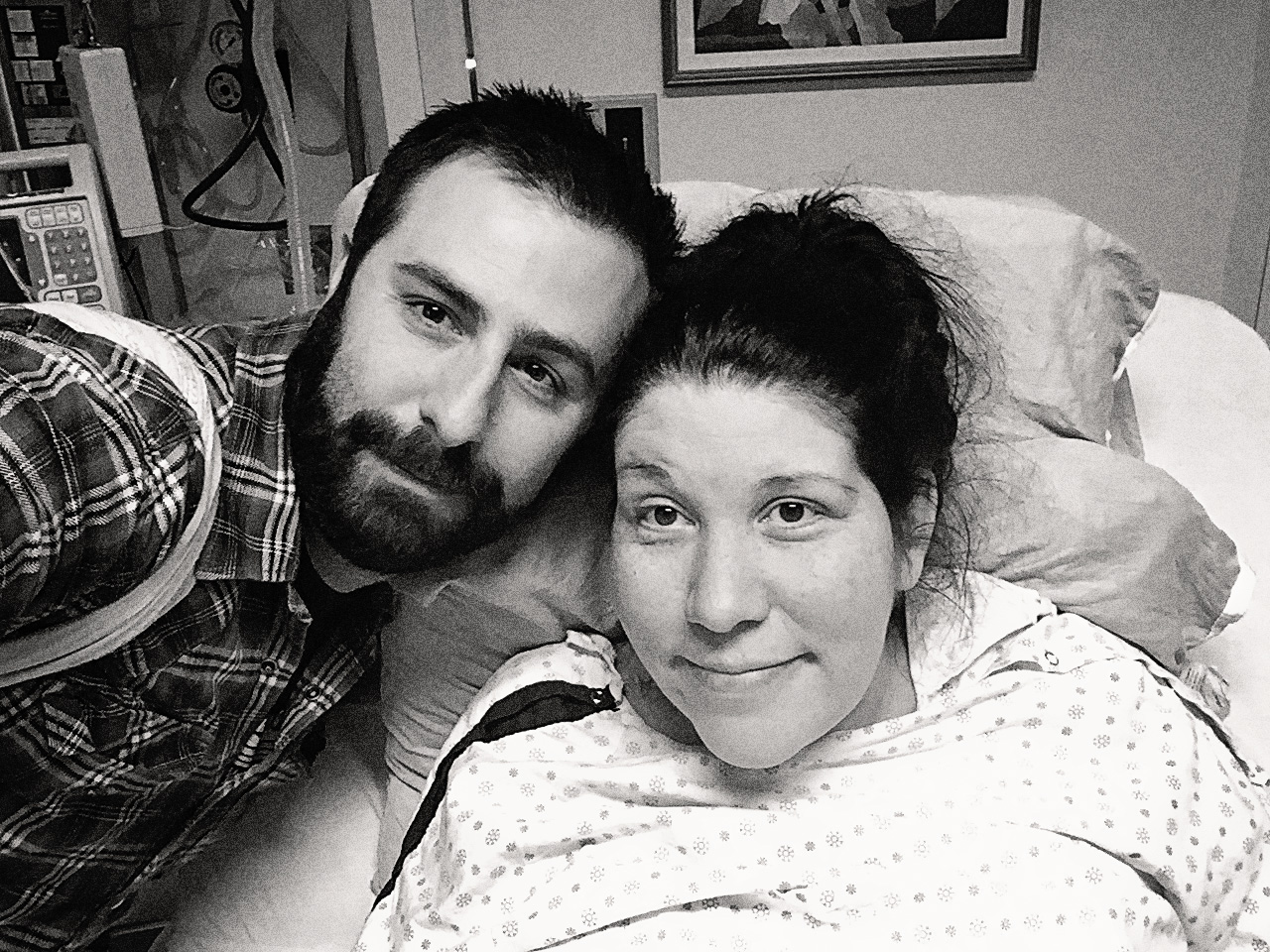 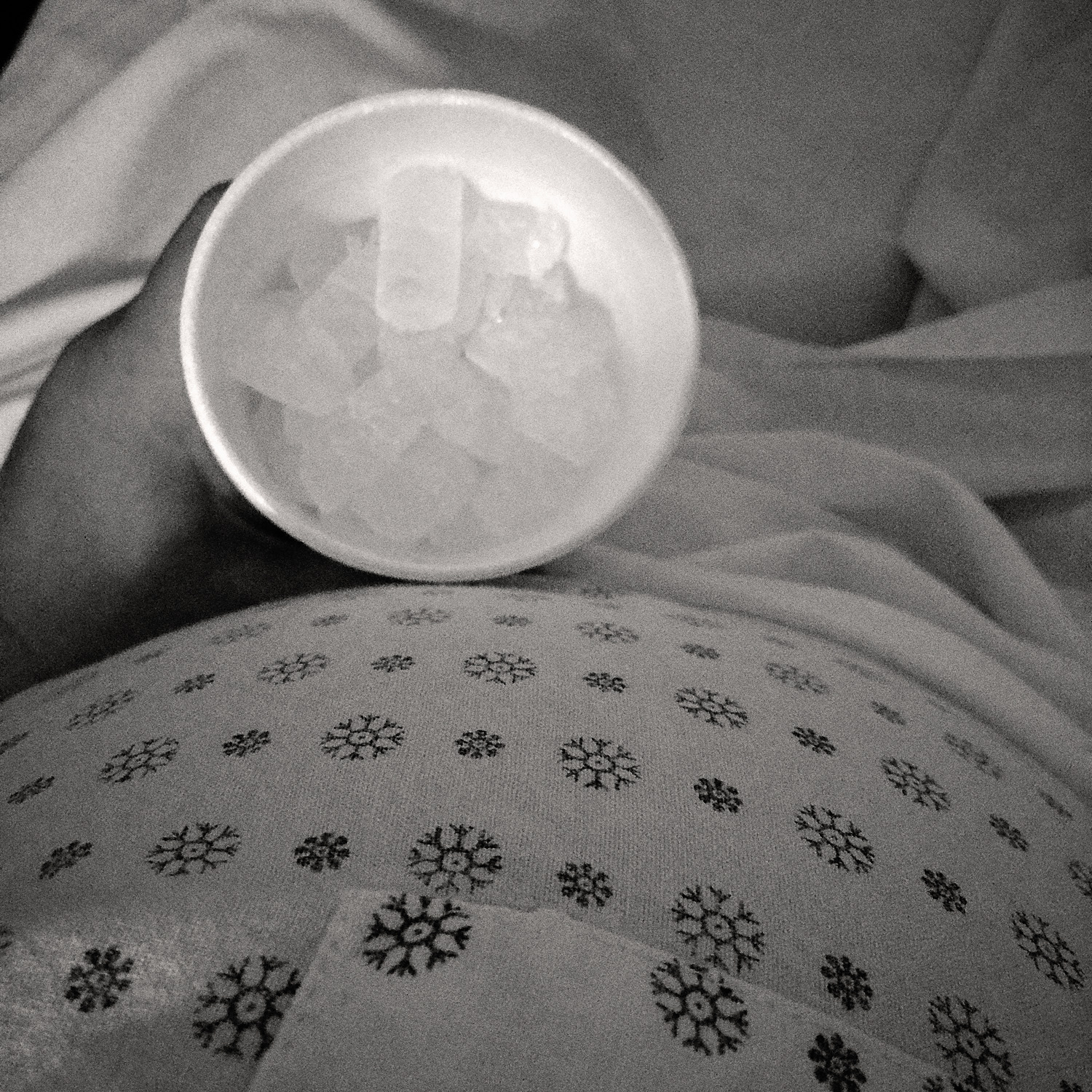 I’m so excited to finally announce that Max is here! He was born on January 7th, 2015, weighing a surprising 9lbs 11oz and measuring 21.5″ long.

After his due date coming and going, I was getting pretty impatient for him to arrive. I actually still didn’t feel all that ready to have a newborn in the house, but I was so physically uncomfortable that I was really anxious for him to come out. Considering he was almost 10lbs – that would explain why I was having a tough time with the last couple of weeks of pregnancy!

I had an OB appointment the week before and my doctor said we could go another week before discussing inducing. Longest week of my life! She did book me for an ultrasound to see what was going on in there, so the day he was actually born – we got to see him on the inside! They told us at that appointment that they estimated him to be around 9 pounds but they often over-estimate. With the girls both being around 7lbs, I didn’t pay ANY attention to the doctor because there was no way he was 9lbs, hahaha!

While Max was born on a Wednesday, I started having contractions on Tuesday morning around 4am. By the time 6am rolled around, I was confident that THIS WAS IT and we needed to head in! We got Emma off to school and dropped Charlotte off at our friend’s house so she could take her to school. Of course it had snowed all night long and was still snowing so the traffic was bumper to bumper and Josh was getting nervous. My contractions were still roughly 5 minutes apart so I felt like we had time.

We got to the hospital and hustled up to triage with all of our hospital bags. Only to be monitored and told that I was only at 2cm dilated. We were told to go walk around the hospital and come back in two hours to see if I had progressed. We did – and I hadn’t. Then they gave us the sad news that it was pretty busy at the hospital and we should go home and wait it out a little longer. A little cry and a shot of morphine and home we went. I slept for a couple of hours and then we took the girls to my mom’s house because we fully expected to go back any minute. I was still contracting but nothing had felt like it changed so we felt ok with waiting.

We left the girls at my mom’s and went home to try to get some sleep. At about 3am I went down to sleep on the couch as I was just miserable and there was no sense keeping Josh up too. At 7am the ultrasound clinic called to book my appt as we had cancelled it the day before thinking we were going to have a baby! At 11am we had our appt and were told there was no need for an induction so to just hang in there until my OB appointment the next day. When we left, I told Josh we were going over to the hospital – the contractions were STILL there and felt mildly stronger.

We walked around the hospital first, and had lunch. I was trying to help my body progress as much as possible. When I finally couldn’t take it anymore – we went upstairs to Labor and Delivery and got put into triage again. This time though – I was 4cm dilated! Progress! They told me that 4cm and regular contractions would normally be enough to get me a bed – because of the full moon and the chinook – there were no beds to be had! I was sent to go walk the hospital halls yet again, and they would text us when a bed became available.

We walked, and walked. And finally sat and sat because I just couldn’t walk any more. Around 4pm, we went back up because I HAD to know if there was a bed. I didn’t believe they were going to text us. I was actually right – triage was INSANE. I had to be checked in a chair at the nurse’s station – there weren’t even any beds in triage. When a bed finally opened up, I was excited to hear how much I had progressed. NOTHING! Still at 4cm. They weren’t kicking me out of triage this time though because my bag of waters was bulging. (shudder) I was still contracting regularly – about every 3 minutes, so they really didn’t know what to do with me. Everything was ready for a baby – except for the hospital!

Finally they asked us if we would be willing to drive across town to the Peter Lougheed Hospital – they thought they might have a bed for us there. It was a pretty hard situation. I was born at the Foothills, both girls were born at the Foothills. I didn’t want to deliver Max at a totally different hospital! I was also worried about the drive over. I was given another shot of morphine but I was still in pain and contracting regularly. The resident on call said he’d check me one last time. It was totally a pity check – he’d seen me for two days and I was always either in pain or crying. LOL! Well lo and behold – he checked me and I was at 7cm! I had dilated 3cm in triage and no one even knew!

After that, everything moved super quickly. They were able to find me a bed, (sorry lady in triage who was scheduled for an induction), and I was wheeled over there right away. Josh went downstairs to get us admitted, and I met the OB. She was really nice and I stupidly asked if she was going to break my water. She said sure and boom, it was done. And then BOOM, the contractions came one after another, harder and harder. I still wish I had given myself like 20 minutes to just rest before having to deliver, but it’s done now!

We got into the delivery room at around 10:20 and Max was born at 11:52. My water broke, contractions happened, and I pushed for 7 minutes. I also only pushed for 7 minutes with Emma. Charlotte was only 11 minutes – so once I feel it’s time – IT IS TIME! In fact, I tried telling them I needed to push but I don’t think anyone took me seriously – until they found out I was 10cm. The OB never had time to make it into the room, but our good friend Dr. Resident was there and helped bring Max into the world. Honestly, this part is all a blur, I really should have asked Josh to write it.

When Max came out he was very blue. Josh cut the cord and then I held Max on my chest. He finally let out a cry and they took him over to the warmers. His Apgars were low at 6 but then were 9 when tested again, so he improved! I had a shower (and broke off the handle – causing the shower to spray uncontrollably all over the place) and we were settled into our shared room in Recovery by 2am.

Josh and I had a quiet and private night watching our new son and talking to each other. At one point we exchanged gifts – neither of us knowing that the other had bought something. I received a beautiful rose gold diamond band and I got him a watch! Then we watched the sun come up over downtown Calgary. It was one of the most magical nights of my life.

My mom and stepdad brought the girls to visit the next day, and then we were discharged at around 3pm. It took us awhile to figure out the car seat and dressing him, and by 5pm we were finally on our way home! We arrived to the dogs being very curious about the new baby, and Rosie even growling at him. She loves him now though, thankfully.

Max is going to be 4 weeks old this Saturday and I cannot believe how fast the time has flown! It’s been definitely lacking in sleep, but he makes up for it by being so darn cute. He’s amazing and we are so very lucky to been given this chance to parent a little boy.