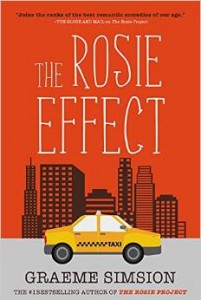 I mentioned the other day about being a completist – what I’m currently in a panic to complete is my Goodreads reading challenge. My friend Laurel suggested it near the beginning of summer and I thought 25 books in more than half a year was very attainable. Sitting at 16/25 books with 4 weeks left to go, it’s looking a little less so. So now I’m trying to power read 9 books in the next month – I have absolutely no idea if I’ll be able to do it!

The book I just finished this morning was a very quick read, The Rosie Effect by Graeme Simsion. It’s the sequel to last year’s hit The Rosie Project which was another quick read.

To me, the first novel was the vastly superior one – much funnier and really more interesting. In this second instalment, I found Rosie’s character to be grating and not nearly as likeable – Don is our protagonist and we want everyone to be nice to him! I do love reading these books through Don’s eyes – it’s a very interesting viewpoint that we don’t often get to see. There are a ton of new characters in this book – some interesting, some not so much. Like I said before though, it was a very quick read, and if you are a completist like myself, I’m sure you’ll want to pick it up if you’ve read the first book!