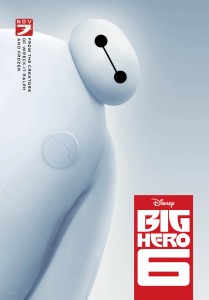 We just got home from seeing Disney’s Big Hero 6 in 3D and it was awesome! I cried twice (although once was at the short animation film at the beginning, lol) but in a good way. There was nothing too heartbreaking – my eldest was sad but 8 year old Charlotte didn’t get upset at all. As with most Disney movies, expect at least one parent to be dead, but I really feel that Disney handles death in such an abstract way that it’s never too sad for kids. (The Lion King being my big exception!)

It’s a fast-paced movie with a cool super hero vibe, but the gentle giant Baymax really steals the show. Full of cute one-liners and great animation, it was an enjoyable way to spend a kid friendly 1.5 hours. I think maybe the sound effects and some of the bad guy stuff was a bit scary for smaller children – but each parent knows their kids and what they can handle. The movie never feels dark or super scary which is surprising for a movie based on Marvel comic characters! The futuristic location of San Fransokyo is definitely a place I could live, Disney did a great job of blending the two cities.

Rotten tomatoes gives it an 88% fresh rating which I certainly agree with. It will appeal to both boys and girls alike as well!