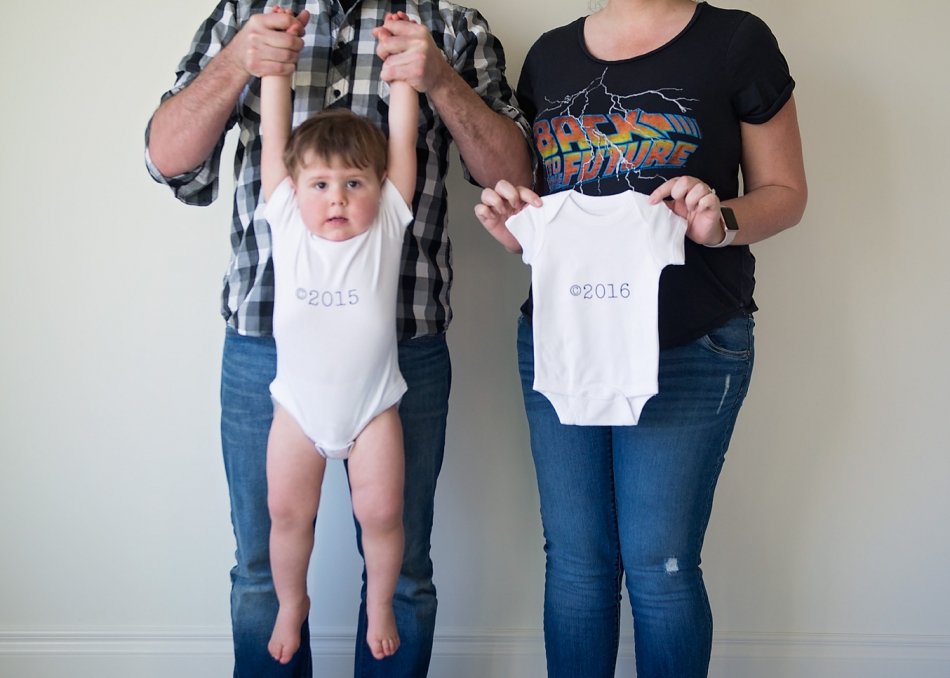 Guys, I feel so crazy. I know so many of you are looking at me like “DANG, THAT GIRL IS CRAZY”. Two under two. AT 41 YEARS OLD. I blame Josh convincing me to have another at juuuuuuust the right time – my hormones must have been off whack that day.

But decide to try we did, and this is our little rainbow baby. We haven’t told a lot of people but we had a miscarriage in January, and we felt pretty gutted by it. With Max we never told people until that nerve-wracking first trimester was over and things felt safer. Josh’s family was up in January for Max’s first birthday and we thought it would be so cute to tell them in person with Max wearing a “I’m Going To Be a Big Brother” shirt. It was super cute and everyone was so happy. So it felt extra hard when we had to tell them two weeks later that we lost the baby. Josh’s sister Liz is pregnant with her first and I know it was especially hard for her – both sad and awkward. We really wanted to try again right away though, as I’m not getting any younger and I don’t really need to be written up in any medical journals as a medical miracle!

As luck would have it I was pregnant the very next month and this time it’s a sticky baby – all pregnancy tests got darker and darker (In January they stopped getting darker and never really got super dark), and I was rife with nausea which was great (and not so great). We heard the heartbeat at 8 weeks and at 11 weeks had a great ultrasound. Baby is healthy and low risk for trisomys, which at my age is a HUGE relief. We had the NIPT blood test which also tells the gender, and we know what it is – but it’s our secret for now!

I guess the reason why I’m writing about so much personal stuff is that with the people I did tell about the miscarriage – I was genuinely shocked at how many people told me that they have had one too. I guess it’s just something a lot of us don’t talk about. I’m not sure if it’s because it’s too sad, it feels like our fault, it’s so early that it feels awkward to talk about it, or maybe just because it involves women’s health which. for God only knows what reason, can be a bit of a taboo subject.

So I’m talking about it out loud, even though it makes me feel a bit weird to do so. Because if you’ve had one too – you aren’t alone, even if it feels like it (it did for me at first). And if you ever do have one, I’m so very sorry. It happens more often than we think and there is nothing wrong with you. Remember that and please believe it.
And also remember that sometimes after the storm comes the rainbow. Oh, and please God, let that rainbow be less work than his/her brother. I’m freaking tired.