I’m back from Las Vegas and as usual, completely knackered. It was a whirlwind week of learning, parties, networking and BIG moments.

I always go with the greatest intentions of attending a ton of classes, and this year was no different. And like all years past, I only attended one class. However, I left feeling incredibly motivated and in love with photography. I’m excited for some personal projects I have been thinking about, excited about sharing new ideas with clients, and excited for some new things coming up for Fresh Sugar.

This was probably the best WPPI I’ve had (and possibly will ever have, lol) because much to my amazement, I won the Fresh Faces contest on the last night of the convention. WPPI puts on a pretty fantastic awards night, complete with stage, crystal awards and gulp . . . speeches! What they don’t tell you however, is if you win. I got an email requesting my presence and reserved seating in the front row, which was a good tip off – but until that moment that they say your name – you don’t know for sure and don’t want to get your hopes up too high.

Walking up to the stage is all a blur for me, all I was thinking was “Don’t fall, don’t fall. Are my Spanx showing? Is my dress tucked INTO my Spanx? Oh God, my butt is hanging out, isn’t it. Does it feel drafty? Don’t FALL!!!!!”

I got up to the stage and my mind went blank. I can now totally relate to those people you watch winning awards who either say nothing and say that it was a really big surprise, (you can believe them now, because it probably was!) or the ones that run on and on until the music drowns them out.

I had visions of a giant hook dragging me off stage so pretty much all I said was thank you. Well, and something about if I said more than that I would throw up. Seriously, my big moment in front of some of the most respected photographers in my industry and I talk about my bodily functions. You can dress me up . . .

I am obviously a big hand talker but I had no idea I am this animated. Apparently I am a cartoon character. A big thanks to my friend Noel Dodd for having the presence of mind to take pics for me! 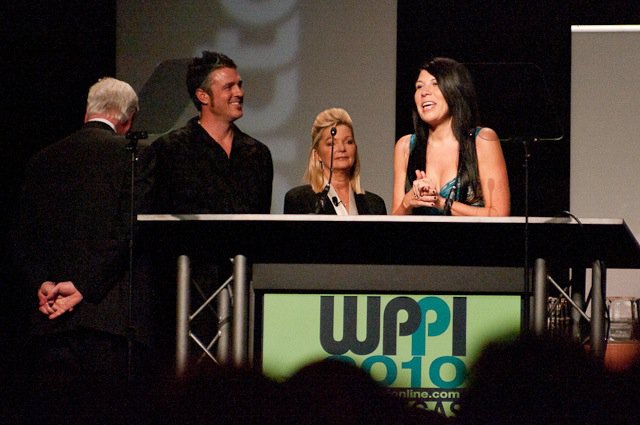 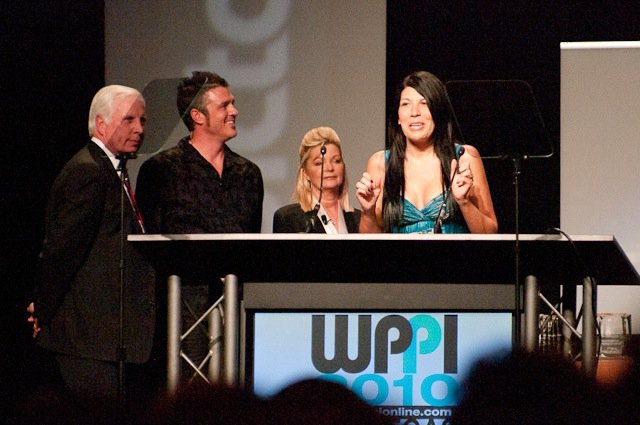 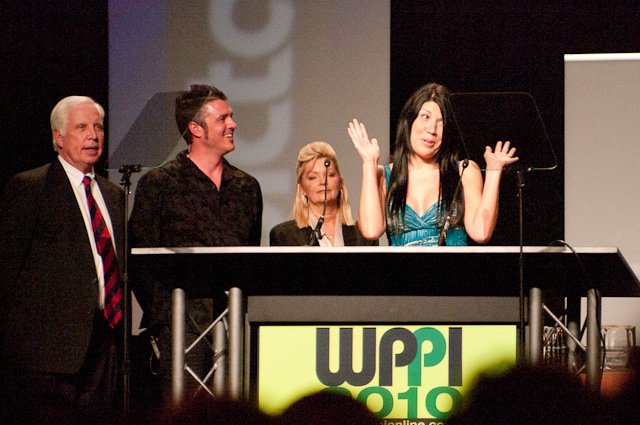 It was an amazing feeling though, and that I will never forget. I will never forget all the love and support I received throughout the week with photographers I knew and had never met before telling me that they voted for me. A big thanks to all of you out there that took the time to vote for me too. Apparently my image received over 16 000 votes, so all I can say is . . . thanks Mom. 😉

I had another great moment seeing another of my prints hang (winning an Accolade of Excellence), apparently my daughters are very good print competition subjects. I was also up for Portrait Image of the Year from my 8X10 competition first place win, and while I didn’t win – it really was an honour to be even included for consideration.

My final thrill was walking the tradeshow floor and seeing my images in some beautiful sample albums that my album company used for their booth. It was neat to see other photographers looking through my work and smiling. I also picked up WPPI’s 2009 book that featured 3 of my photographs. It’s a huge coffee table book full of some of the most amazing photographers. I feel so lucky to be included.

I’m still in shock and awe from the week’s events. Trying to catch up on my sleep and hugging my kids. I am so excited for sessions to start again this weekend, and I can’t wait to see old clients and new. I have so much great stuff to offer, I feel like 2010 is truly going to be my year.