A Week In Their Kitchen – Day Four

One of the coolest things about doing A Week In Their Kitchen are the conversations I’ve had with people about the Food Bank. Almost everyone I’ve spoken to has said the same thing after reading my posts – that next time they donate to the Calgary Inter-Faith Food Bank, they will think carefully about what they are actually donating. I know for myself, a lot of times it’s been whatever is in the cupboard that I don’t think we’d eat. But I think from now on, I’ll actually do monetary donations or make special purchases to donate. This week I know we would have loved to see more canned fruit and veggies (fresh too of course, lol), maybe some more kid-friendly school snacks and some wine. LOL. Ok, maybe I would have liked to see some wine but I get that’s not happening at the Food Bank.

I think my kids are starting to hope that we always live like this. Emma told me this morning she loved how nice I’ve been this week and how awesome it is to have so many home-cooked meals. Wow.
I made some scrambled eggs and peanut butter toast for breakfast this morning, and was shocked at how well that held me over until lunch. Yay protein! 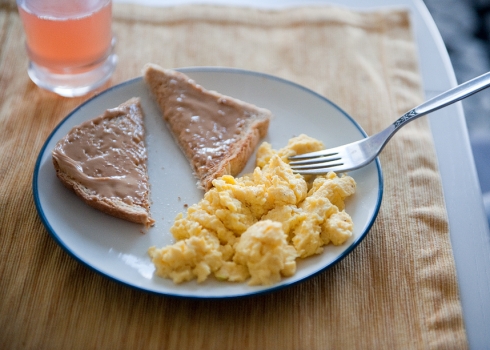 Emma had a half day at school so this afternoon we went over to Cochrane to the Spray Lakes complex where they have some bounce houses set up on one of the hockey rinks. The girls had a great time bouncing around and I have to admit, I LOVED that they didn’t complain about only having water to drink. My kids are notorious water-avoiders, I think they will drink almost anything over water. We ate at home before we left, and ate again at home when we got back. It was a very different outing that we would usually have, because the complex has all sorts of vending machines that I know I would have succumbed to. It’s unfortunate to think how many families have to live this way, while mine takes casual spending of money on food so for granted.

Dave had a half day at work today so he graciously made dinner tonight. Cabbage and hash browns, grilled cheese and tomato soup. The girl who hated cabbage is now making it her goal to finish all the cabbage we received by the end of the week.
Only one head left! 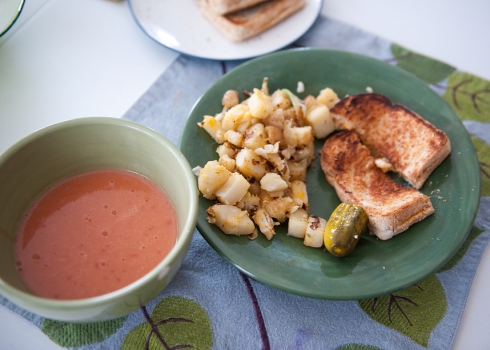 The girls and I are having a girl’s night tonight while Dave is out at his monthly poker game. Normally we would have popcorn and candy while we watched our movie – but tonight we’re making smoothies with yogurt, milk and ice!
Dave was a bit subdued when he left for his game. Usually it’s beer, pizza and various boy-friendly snacks, but all he took with him was a water bottle. He’s an awesome guy for taking this so seriously.

I think everyone is getting a little tired of me taking photos of them eating, but I keep telling them that it’s compelling journalism. 😉