32 iPhone photos from Victoria, BC

I didn’t bring my camera this past weekend to Victoria. I was planning on bringing my point and shoot, but forgot it.
I thought about bringing my Diana or my Holga, but forgot them.
So Dave says to me, what do you need a camera for, we have cameras in our PHONES! Like I am an idiot for not even considering this idea. Like I am possibly an idiot for not doing all my client sessions with an iPhone.
So even though I shot him a dirty look at the time, I have to thank him now. It was freeing not to worry so much about the shot, and pretty darn convenient to whip out my phone whenever I wanted.
The only problem is that because it is so small, you sometimes forget it’s there. So I didn’t use it as much as I would have one of my big cameras, but on a romantic trip for two to Victoria, maybe that’s a good thing. 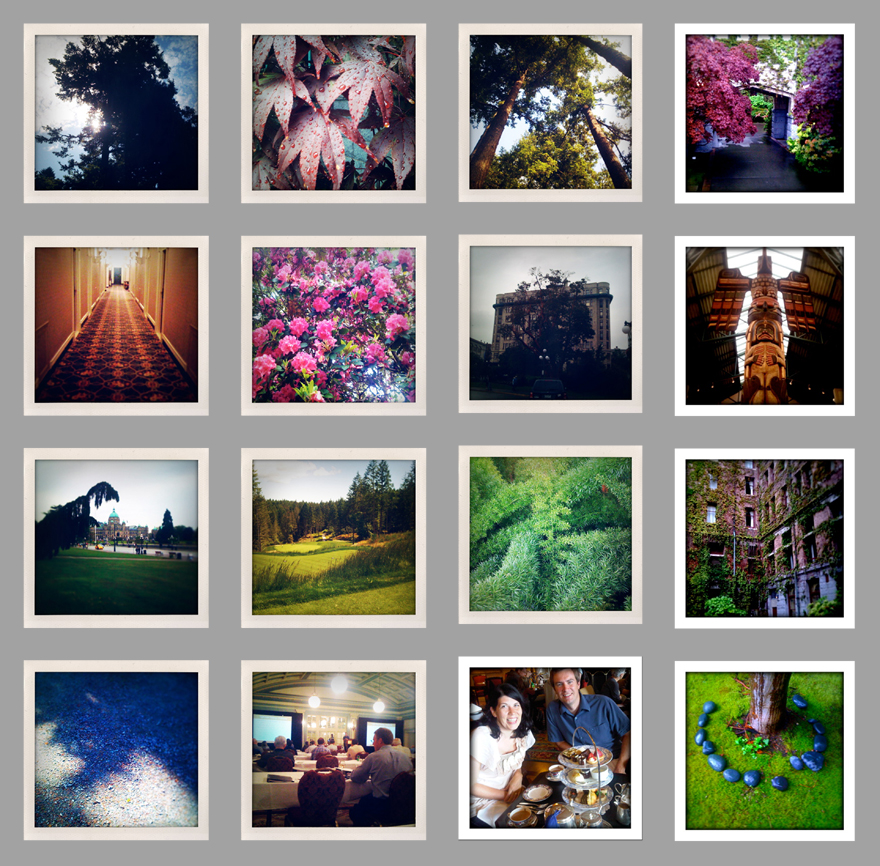 1. Some trees when we were sitting on a bench checking into our flight on Dave’s Blackberry. 2. Some rainy leaves from the garden at the hotel. I kept calling them dew drops and Dave kept correcting me. 3. Some really tall trees at the Governor’s garden. 4. What I fondly called the Secret Garden all weekend long. 5. The long spooky hallway to our room, where I tried to make my mind open to a ghost, but no ghost came. 6. Pink flowers of some sort. Pink is my fave color. 7. The building across the street from the hotel. No idea why I wanted this photo. 8. Giant totem poll at the convention centre. It made me remember I needed to go check my little people in Godfinger. 9. A government building of some kind. I didn’t go over there, nor did I remember to take a photo at night when it is all lit up like It’s A Small World. 10. The golf course at Bear Mountain. It’s where I shot a 40. Is that a good score? I’m just kidding, I have no idea what I shot. I par’ed a couple of holes though, which is relatively new for me. 11. Some ferny looking things. I am very at one with nature if you couldn’t tell.
12. The corner of the Secret Garden. 13. A shadow. I was trying to be artsy. Or maybe I accidentally took a picture when I was putting my camera in my pocket. You’ll never know. 14. I snuck into Dave’s program that he was presenting. The whole reason why we were there.
I had no idea what he was talking about, he sounded like a crazy person. Mini-frac babbity bak? 15. We are at high tea at the Empress. It’s old and fancy there and clotted cream is my new best friend. 16. Some rocks around a tree. With some moss for good measure. 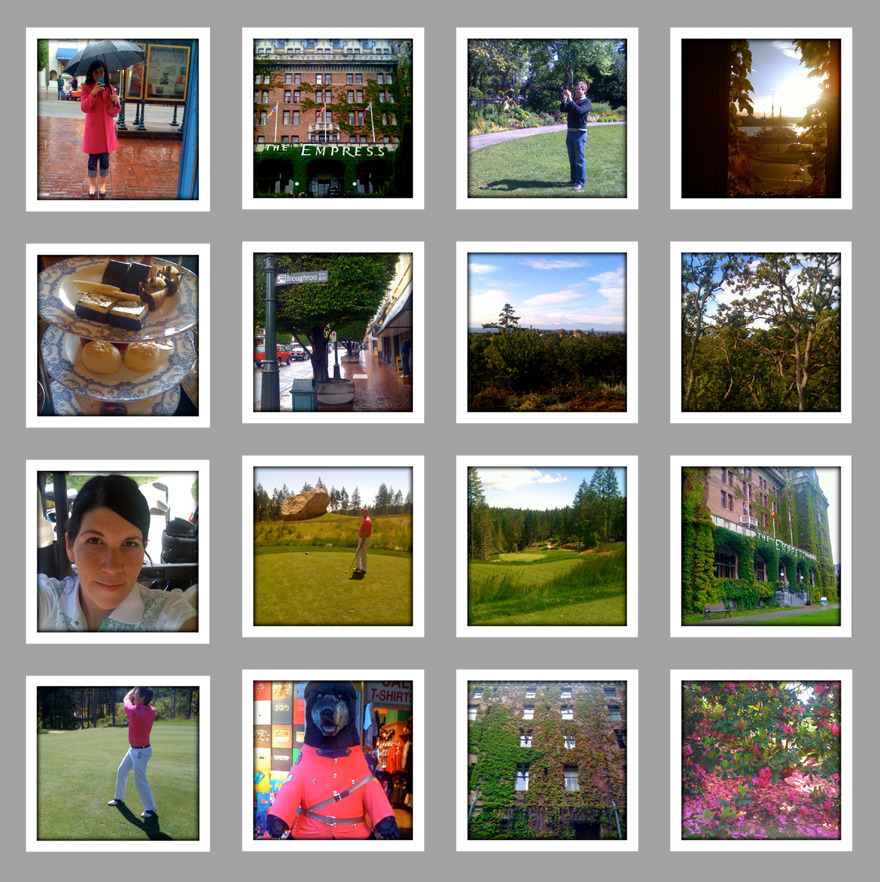 17. Me, with my borrowed umbrella walking down Government Street all on my loney-owney. 18. Hey, that’s our hotel! 19. Dave proving how wonderful using a camera phone is. I think this is the first photo he’s ever taken in his life. He was taking a picture of a fountain. I’m not kidding. 20. The sunset out the window of the hotel. 21. Tasty tea cakes! 22. Broughten Street. Which caused me to say “Oh, it’s already been broughten” alllllllllll weekend long. I am a very fun companion. If you don’t know that quote, FOR SHAME! 23. The ocean and some mountains and some more trees. Dave once again trying to make me commune with nature. 24. What is with all these tree pictures? I obviously have some sort of fetish. 25. That’s me in the golf cart. Right before the drink lady came and we got Caesars. YAY! 26. Dave on the tee box. He wasn’t very happy, so I tried to calm him down by taking his photo. I would have photographed his golf balls, but he kept losing them. 27. Yes, you saw this photo already. Very observant of you. 28. This is our hotel again. The whole leaves-up-the-side-of-the-building thing was very cool to me. 29. We are back to golf again. Dave’s swing. I was trying to take a photo of the golf ball so we could make lost posters and hang them around town. 30. A bear in a Mountie suit. Need I say more? 31. Hmmm. More leaves-up-the-side-of-the-building. 32. Pink flowers that all fell on the ground and looked like they needed their picture taken. Next time I will maybe think twice.

« A little more adorable for your weekendNewborn cuteness! »